The Full Moon over Athens

The glowing full moon was hanging over Athens, and at the National Observatory, on a hill opposite the Acropolis, artists from Greece, Norway, Denmark and France - four musicians and two dancers - created a unique full moon concert based on Per Bloch’s Kokoro album: eight love songs in eight different languages - a multilingual, hybrid concert

When the concert started four hundred people had already taken their seats in front of the beautiful observatory, built by the Danish architect, Theophilus Hansen. Meanwhile there was still a hopeful queue waiting at the gates. A handful of newspapers and websites had already written about the concert, and the Greek news (ERT) arrived to broadcast it live – see video above. The term “world music” was given a brand new definition, and Kokoro was brought to life in the country where Per Bloch wrote the first of the songs: the Greek song Ελευθερία (Eleftheria).

Crossing Cultures and Breaking Boundaries
It was an extraordinary scenography that night, under the open skies – summer breeze, light and stars, music and dance. The musicians had been dressed by the Greek fashion designer Ioanna Kourbela, and the women, all in white, resembled the nymphs reputed to have once lived on this hill in ancient times. The songs were in Danish, Icelandic, English, German, French, Spanish, Greek, Arabic and a brand new composition made especially for this evening as a tribute to the full moon. This piece was performed by Krystalia Theodorou (Greece) and Per Bloch (Denmark): ambient recordings from Athens and Copenhagen with digital atmospheres and notes.

The idea for this project goes back to 2012, but because of the increasing refugee crisis and the rise of divisive political movements, the need for a concert that honours and celebrates humanitarian and cultural fusion is more relevant than ever.

The general rehearsal for the concert was held the evening before, in front of a small audience, at The Danish Institute in Athens.

The concerts were a collaboration with The Danish Institute and were supported by The Sonning Foundation, Koda, The Oticon Foundation, Den Bøhmske Fond, Tempi and DJBFA. 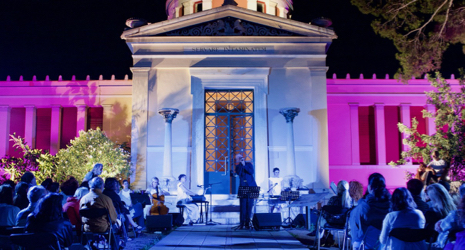