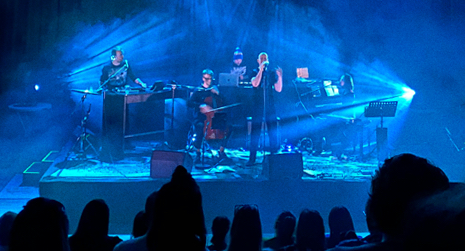 The festival Arctic Sounds in Sisimiut, Greenland, had invited us to play Kokoro live. From the programme:

Kokoro Live is anything but an ordinary concert. Together with his ensemble Per Bloch will perform his album, ‘Kokoro’, where he sings songs in English, German, Danish, Icelandic, French, Spanish, Greek and Arabic. Kokoro means heart in Japanese, and the concert is a journey in language and diversity and is tailor-made to Arctic Sounds: 8 love songs in eight different languages.

Kokoro shows that music is an universal language. There is something beyond rational understanding. You can understand more than you think … it’s a question of how you listen to the world around you.

We played the concert at The Cultural House Taseralik, had a listening party for Per Blochs brand new album “Panneq” and participated in Nordic exchange and networking, which is a part of the festivals’ brand. After the concert Per Bloch sailed to Nuuk for a children’s book event in the bookshop Atuagkat and to record a music video.